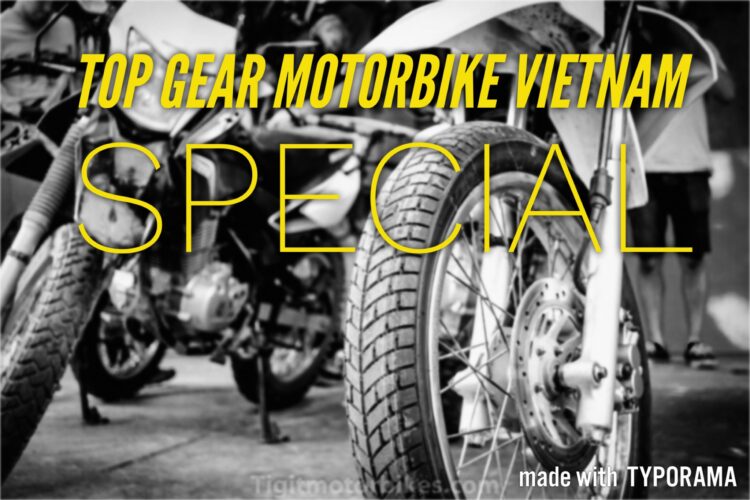 In December of 2008, the dream of driving across Vietnam was proven to a mass market that would forever change the idea of traveling Vietnam. A 75-minute BBC special for Top Gear featuring the dynamic trio Jeremy Clarkson, Richard Hammond & James May as they crawled, crashed and completed (mostly) a motorcycle journey from Ho Chi Minh City to Halong Bay in the North of Vietnam.

Top Gear Vietnam Episode – What You Should Know

How You Can Ride The Top Gear Vietnam Route

The show was obviously laid out to evoke the most amount of drama possible. Watching three guys ride Ho Chi Minh to Hanoi on reliable rental motorcycles would not be that entertaining to watch. The boys instead rode three piles of garbage that required regular ongoing maintenance throughout the journey. This is perhaps the inspiration behind the Chinese Honda Win that we often see backpackers buying and selling in Vietnam.What you don’t see in the background is the caravan of help following them along the way.

For those who don’t plan to ride Vietnam with a full support team ( you could, things in Vietnam are cheap), an excellent introduction to the country is a fully guided motorbike tour, or rent a quality motorbike for a one-way journey across Vietnam.

What Motorcycles Did They Choose?

Top Gear is typically centered around fast cars or luxury vehicles, and with that in mind, our hosts Hammond, Clarkson, and May are given boxes full of cash to purchase a vehicle to travel the length of Vietnam. To their initial delight, there are millions in the box, and this quickly turns to dismay as the millions are Vietnamese Dong and not Pounds or Dollars. The original plan to buy a muscle car or any car evaporates as they learn the Dong to Dollars conversion leaves them with around $1000. The price of import taxes in Vietnam on new cars was high, and they instead settle on buying cheap motorcycles. If you know Clarkson well, you’ll know his distaste for all things motorbike. 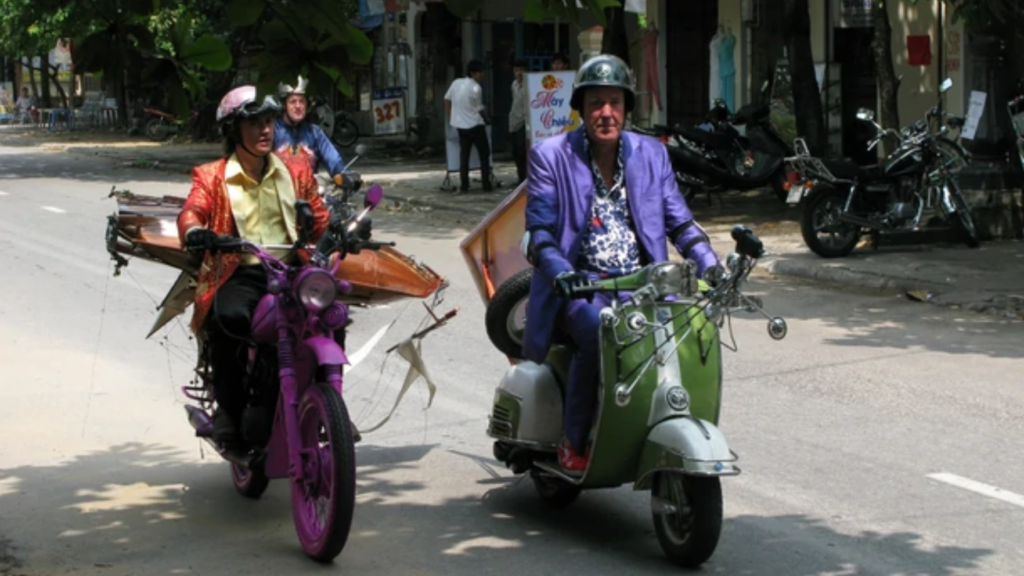 To see the outline of the route they drive, see our article on Saigon Motorbike loops.

The trio is given instructions that they’ll need to make it from Saigon to Halong Bay in 8-days. In preparation, they try to purchase helmets for the adventure. Hammond found one without issue, but May and Clarkson find their heads a bit out of sizing for the Vietnamese market and need to get custom helmets made. Eventually, they arrive in Dalat with a bit of extra effort from May, who needs to push his Cub to make it up a hill and finish the journey.

The boys set off from Dalat in the mountains to the coastal city of Nha Trang. Before leaving, Hammond is presented with a new pink helmet to replace his previously destroyed one. During the ride, they are hit with penetrating rains, May runs out of fuel, and producers add a 73 Honda Chaly mini bike painted in Easy Rider stars and stripes to the roster as a backup bike.

The group opts to stop and have suites made in historic Hoi An. Looking quite smart, they continue on this leg. On the road, the bikers make their way up and over the Hai Van Pass. The pass is a stunning section of roadway connecting Danang’s modern city with the historic city of Hue. The suit stop has since become an icon of Hoi An, and the scenic route over the Hai Van pass part of a must-do pilgrimage for travelers of Vietnam.

Stage five opens with the boys trying to obtain Vietnam drivers’ licenses from an instructor strictly in Vietnamese. As you can imagine, this doesn’t go well. Clarkson does answer one question correctly but fails the driver’s test miserably. Back on the road, the trio concludes they’ll never make Halong Bay in time. They opt to put their motorbikes on the train, but they arrive only to realize they’ve made a mistake and arrived in the wrong city.

Producers devise a new challenge; The boys need to find a remote bar in Halong Bay by converting their motorbikes to amphibious vehicles in a workshop during the night. Each sets off from shore, and Hammond and Clarkson make it. May’s boat sinks twice before he swims to the final destination on dry land. 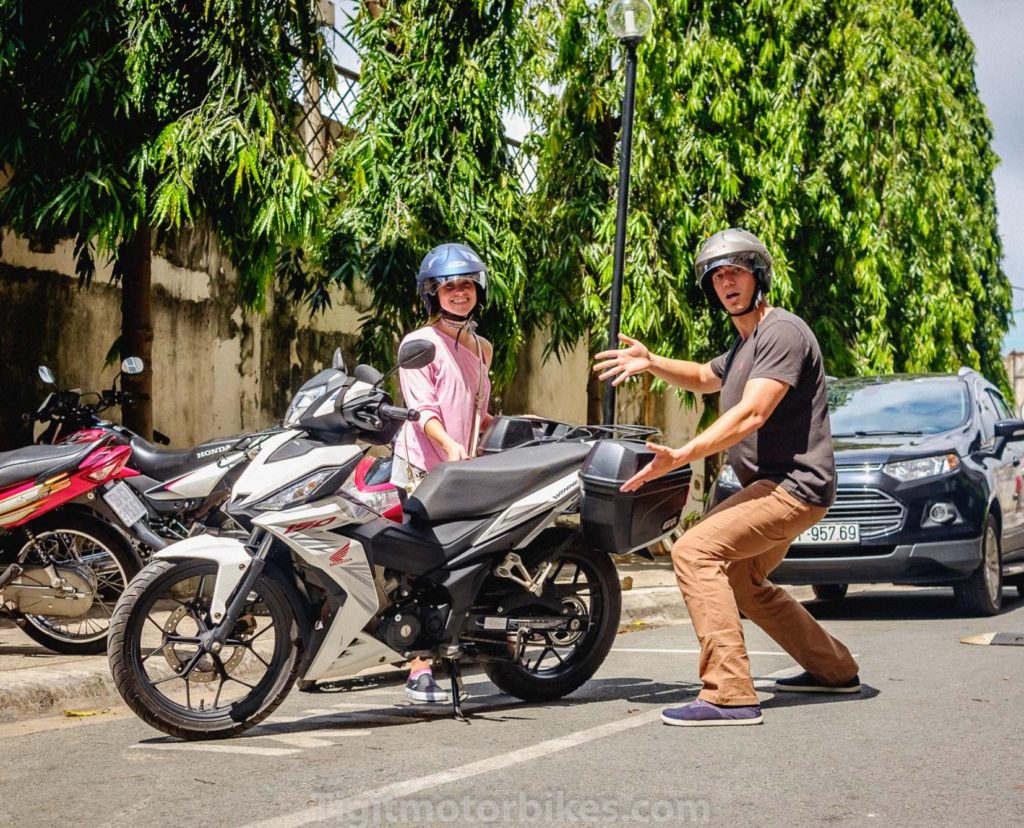 How You Can Ride The Top Gear Vietnam Route

Behind the scenes, the Top Gear team only travel for around 4-days on their motorbikes. In true Top Gear fashion, the boys’ banter and a comical scene of hilarious breakdowns unfold. Once edited down to 75-minutes, this makes for excellent entertainment. Breakdowns, banter, blown budgets, and sinking boats might be an adventure for a select few. However, once you’re standing on the side of the road hours from nowhere with a broken bike, you might have wished you just picked up a quality motorbike rental.

The rise of the backpacker motorcycle market in Vietnam

The Top Gear special’s wild popularity opened the gates to backpackers with zero motorbike experience and limited budgets hoping to recreate the highly edited and well-funded Top Gear special of their own.

Backpackers began buying up $300 Honda Win motorbikes letting themselves believe the derelict bikes are roadworthy machines. The result, holidays ruined by blown budgets, breakdowns, and feeling that the seller has ripped off the buyer.

To regain some of their losses, these travelers will then sell off these problem bikes to the next poor soul via Craigslist and Facebook ads that can easily be seen in the copy and paste versions titled “Reliable With No Breakdowns.” The cycle continues, leading travelers to believe that Vietnam is only filled with garbage motorcycles.

The market is rapidly changing, and Vietnam is slowly clawing back respect among ADV riders worldwide as a country viable to travel legally with a proper motorbike. Tigit Motorbikes is pioneering this up-and-coming booming adventure scene. For those of you who still need more convincing, we sat down and wrote up the 16-reasons why anyone can travel Vietnam on a motorbike. 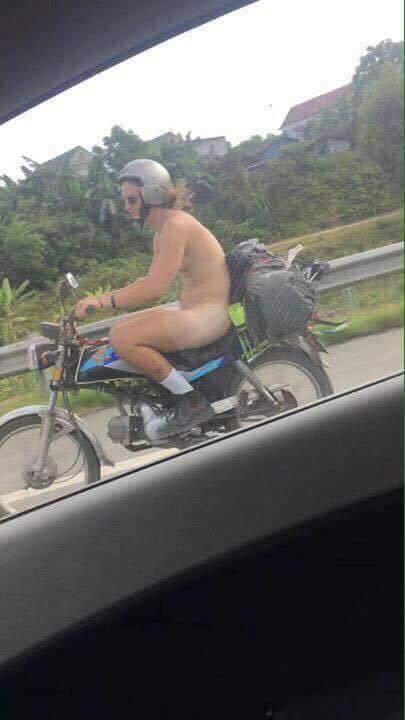 How the Honda Win looks with a board-shorts tan!