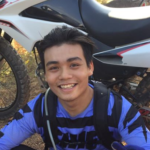 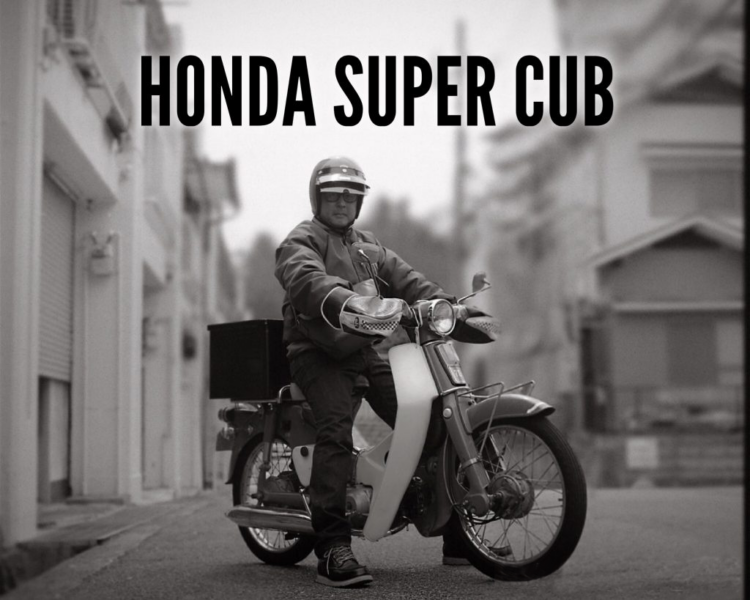 Produced more than any other motor vehicle in history, the Honda Cub or Honda Super Cub first found its way onto the roads in 1958 and by 2017 had sold over 100-million units in their Cub Series. A series that includes a variety of 50cc-125cc models. In Vietnam, this was once a status symbol and the bikes relentless reliability was enough to keep up interest and popularity across the ages.

When Honda co-founder Takeo Fujisawahe was putting together production plans for the bike in the ’50s, he was looking to appeal to the delivery boy market in bustling Japan. As a result, he insisted that the motorcycle was easy to drive with one hand, so riders could carry a tray of Soba noodles with the other. They could, and it worked. The appeal to the blue collar worker was a raging success.

In 1956 the cub was released under the title C100/Honda 50 with a 4-stroke 49cc engine and within six years had expanded sales, distribution, and manufacturing across America, Germany, Belgium, the UK, and France. This ease of use along with the Cub’s reliability, longevity, convenience, and economical efficiency made the bike a hit in every country.

Legend suggests that the word CUB was the anacronym for “Cheap Urban Bike”. Fitting as it is, there is no evidence for this. The price point did ammas into a small fortune for Honda though.

In 2006 the discovery channel came out with a series rating the best motorcycles on the planet. The list included some glamours names you’d expect like Harley and Ducati. To drive home the point of who was best they tried to kill the Cub via crashes, drowning, and excessive abuse. In the end, the bike started and continued on just like it has for more than 60-years. Thus it was titled “The Greatest Machine Of All Time.”

Why’s The Honda Cub So Popular 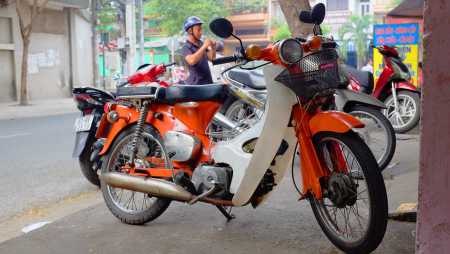 You Meet the Nicest People On a Honda

A little bit genius, a little bit luck. The idea for this 12-year advertising campaign was purchased from an American student who dreamt up the idea as a class project. Shortly after the Beach Boys wrote a song about the Cub, which was released by the Hondellas who then released a song titled “You Meet The Nicest People On A Honda”. Cheap bikes with celebrity status, Americans could hardly resist.

This clean-cut American advertizing was in direct contrast to the bad-boy imagery of riding a motorcycle conjured up by most other American brands at the time and Honda’s campaign would cripple the American and British motorcycle sales as backlash came to be known as the Japanese invasion. 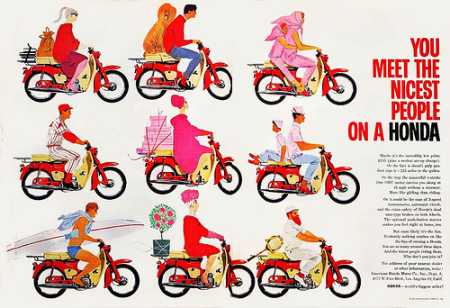 The Cub In Today’s Vietnam

These days on the streets of Saigon you can find locals and foreigners riding run-down Cubs often 20-30 years old. These older bikes require a lot of ongoing maintenance and are considerably slower than a modern scooter with a 125-150cc engine. People keep them around as they are quite cheap, even to fix, and no license is required to drive one that still has a 50cc engine. That said, most of the old Cubs are just a nostalgic shell with a 110cc Chinese engine – another reason the reliability isn’t good. (Really, no license of any kind?)

The name Cub carries a lot of sentimental feelings to those who grew up just after the war. To them, the Cub was both a friend and a legacy. For a family to own a Cub back then, was like owning a fancy car nowadays. My father bought one when I was a 4 year old boy, and we were seen as celebrities in the local neighborhood!

On occasion, you can find age-old Honda Cubs in nearly immaculate condition. These restored Cub owners are typically the men and women who grew up during a post-war Vietnam when the bike was a status symbol. You can find Cub group meetups where the owners showcase this eye-candy on wheels to friends and anyone passing by. The bike is always an instant conversation starter.

The Super Cub has been manufactured in Vietnam since 1996

How Much Is A Honda Cub In Saigon?

A highly coveted motorcycle, if you can find an original one that’s been well-maintained, prices hover around 40-million vnd ($1700). Cubs in excellent restored condition can go for more than the newer Honda SH150’s, the Ferrari of the scooter world in Vietnam.

Like all things in Vietnam, you can find variations of this bike. A number of motorcycle dealers sell newer model Honda Super Cubs or Honda Little Cubs for around $600 on the premise that these bikes are “Imported From Japan”. Like the Honda Win, these too are just cheap Chinese knock offs that hold no value.

On the heels of the 100-millionth Cub Series motorcycle sale in 2017, Honda hit another milestone with the 60th anniversary of the Cub in 2018. To celebrate they released a special 60th-anniversary edition motorcycle in America. This is the upgraded version of the Cub with a 125cc fuel-injected engine, no kickstart, equipped with ABS, cast wheels, and an instrument cluster that incorporates LCD. A modern classic you’ll probably see running the roadways for another 60 years.

Currently in Vietnam Honda sells roughly 2.38-million Hondas each year with over 900,000 of those sales in the Cub Series line up. Though the original Cub doesn’t come rolling off the production line anymore, Honda considers the Wave Alpha 110, Blade 110, Wave RSX110, and Future 125 part of this series and just like the Cub, these bikes are some of the most reliable you can ride.

3 Replies to “The Honda Cub In Vietnam”