Following Tigit Tuyens tour of Tu Lan 3 with the “Super Four” and Hang Va with new friends from the North and South. Tuyen who sings in the rainy afternoon, has returned to the land of Quang Binh once more to explore Son Doong- the world’s largest cave. The trip can is said to be a once-in-a-lifetime experience – Son Doong Tour with “Super Fun Squad

This is an article translated from Vietnamese to English and then cleaned up a little bit by Tigit Jon. I hope it reads organically and naturally. I tried not to over-edit the language!

First of all, I would like to talk about the “Super Fun Squad” members briefly. The first is Ms. Thuong, an old member of Tu Lan 3’s “Super Four.” Her favorite saying is, “Do you want to eat me?!?” She asked one leech after she pulled it up from under her feet.

The next member is handsome Mr. Long. Then Mr. Ha who looks quite serious at first, but he quickly became like a warm brother of the whole group, Mr. Minh is quite flexible in gender, Mr. Hanh is cute, Ms. Phuong is thoughtful, Ly is a beautiful girl, and Ms. Huong with the nickname “Strong Woman,” and the last character that stands out the most in the group is Mr. Kiet – “King of the Leeches.” Can you believe it? Every day he attracts an average of 2-3 leeches swinging around his belly. Leeches don’t find other members very attractive. 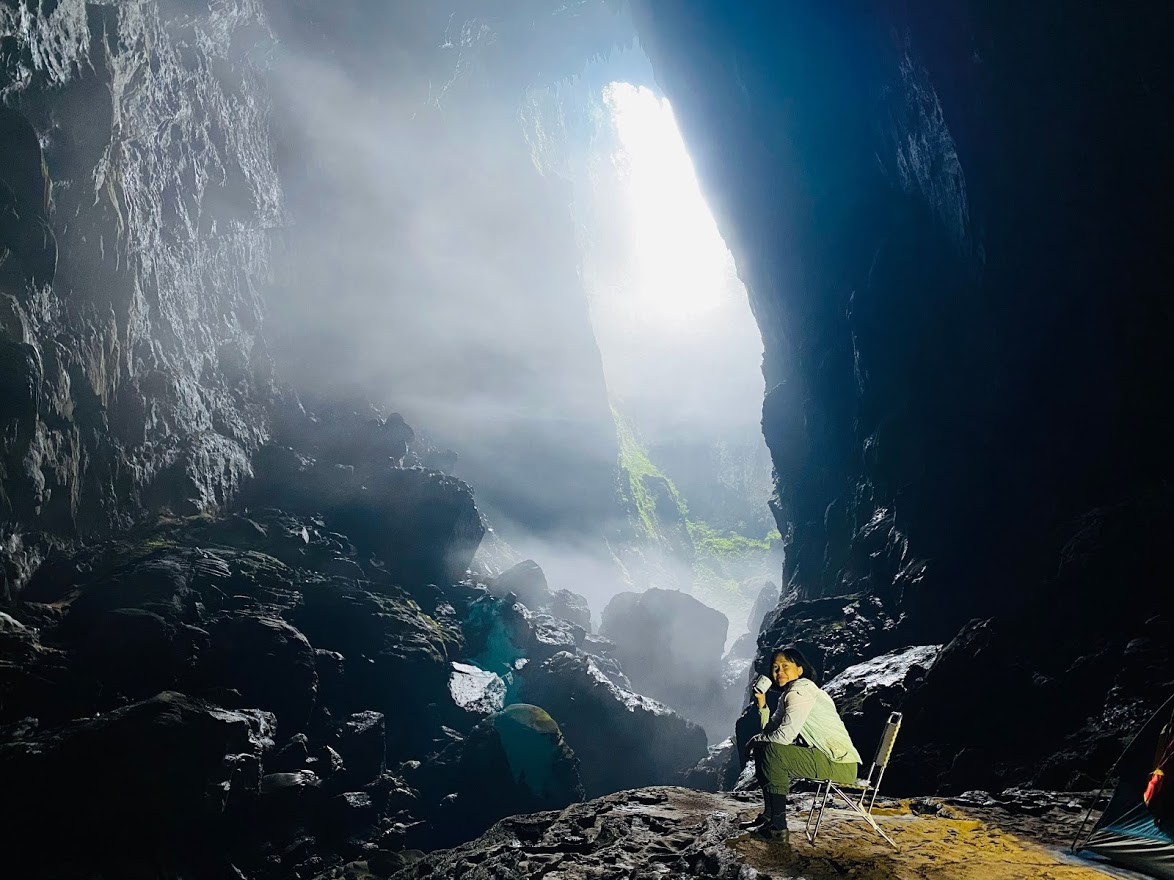 Our group is fortunate to be led by a very enthusiastic tour guide named Tha and the number one cave expert in the Oxalis organization – a foreigner named Howard Limbert. Our photographer is named Ox, and the handsome boy named Bien is the security team captain. The strongest and the most handsome Oxalis member is Mr. Bom; he is the porter team leader and responsible for managing the campsite.

The first day we went for a gentle walk. The weather was lovely. The stream was clear and cool, and fish waded around, butterflies fluttered. The scene is very poetic and lyrical. We stopped for lunch at Doong village of Bru-Van Kieu people. After lunch, the group went straight to En cave.

The first night, everyone didn’t hesitate to show their friendly and super-enthusiastic nature to each other. Hoa Mi’s voice is inherently divine, but because it was so fun, I talked with a high voice a bit too much to the point of losing my voice for the next two days.

The second day was my favorite day, even though there were more challenges, experiencing all kinds of terrain. The group went through the back door of Hang En to go to Son Doong cave. At this time, I was really overwhelmed with the beauty of the fairy scene in front of my eyes, right at the back door of the cave. Prominent on the green background of the forest trees is a clear stream, hundreds of fish swimming around, a few small jets of water flowing down from above to create a thin curtain of water.

After having lunch near the mouth of Son Doong cave, we started our journey to discover the largest cave in the world. When we first arrived at the cave’s mouth, the group was a bit stunned by the rather spooky atmosphere as if they had entered the goblin cave. Looking into the deep, dark cave, the outside is full of long sharp teeth as if ready to swallow all of us. However, the “Super Fun Squad” was not afraid. 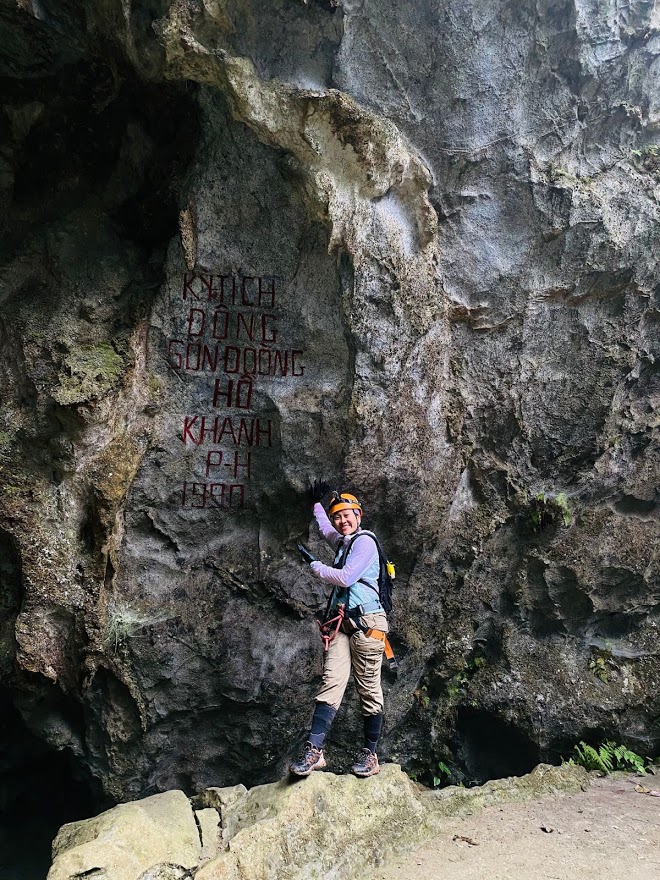 After a few pictures of checking in at the cave entrance, we happily went down to explore the cave together. The feeling of swinging the rope into the dark cave for the first time is truly indescribable. No one dared to look around but only focused on looking at the stones, firmly placing their feet, firmly grasping the rope, and following the instructions of the safety assistants.

In the end, everyone made it into the cave safely. From here, we followed the wet cliffs, crossed two suspension bridges and reached the “Hand of dog” viewing point. At first, I was always curious why someone named it so strange. It turned out that this was a problem when communicating via walkie-talkies of the cave explorers. A person in charge of names wanted to call it “Hand of God,” but the person confirming the name to save in the history books heard “Hand of Dog.” That’s how the tall stone got its name.

After a while of crawling and crawling on the rocky trail, the group reached the first campsite located in Son Doong cave. The weak rays of light at the end of the day crept through the skylight next to it, the campsite appeared shimmering and fanciful. We rested for a few minutes, then went swimming. We kept our hiking clothes on to go swimming. All-day long trekking, sliding, climbing, being immersed in the cool stream felt extremely refreshing.

The third day was the most anticipated when we took the most beautiful pictures. Everyone was dressed in their most colorful clothes and ready to go after a delicious breakfast. Many of the group loved to check in with the famous “wedding cake,” but I just stood there dumbfounded and watched the bright rays of sunlight shining into the cave from the sky hole, also known as Doline 1. The golden leaves falling from above with the sun’s rays create a fairy tale that makes me unable to take my eyes off.

After having lunch in this place with the most amazing views in the world, we walked around the “garden of Edam” with abundant primeval vegetation and walked through the mountains, and passed through giant stalactites and cave pearls.

This day was full of the most memorable and beautiful scenery on Earth. On those beautiful rocks, there are still coral fossils and tiny creatures under the sea from 3-10cm long, which existed approximately 350 million years ago.

After crawling from muddy rocks to rocks for a while, we reached the final campsite. Thin patches of dew hung in the middle, the white ground is smooth, looking from afar, the camp is again, in fairytale land. At night, we could even see the stars in the sky. After a delicious five-star dinner, we all had a good night’s sleep, preparing our strength for the journey over the “Wall of Vietnam” the next day.

After a nutritious breakfast, we walked for about 1km and then rafted about 600m on Son Doong lake with wonderful jade green water. We were now ready to conquer the 90m high stalactite wall.

When entering the cave, the group was both excited and nervous to climb down 80m to explore Son Doong, this time climbing up the high wall to get out of the cave. Our group was focused on the task at hand but also had to battle feelings of not wanting to leave the cave. Many of you may feel overwhelmed with the monumental wall. However, the safety assistant team members are always by your side, coordinating smoothly and in harmony with each other to support the whole team to overcome challenges smoothly.

After having lunch on the top of the wall, the whole group went through the forest to leave. As soon as we emerged from the edge of the forest, Howard greeted everyone with a big smile, giving each one a noble medal.

So the journey of four days and three nights to discover Son Doong cave ended well. It left in each of us the feeling of victory. We overcame ourselves, overcame challenges, and met extremely friendly people. We did all this while experiencing one of the most majestic and beautiful places on earth.

The “Super Fun Squad” developed friendships that will last for life. Sincere thanks to Mr. Howard for the interesting and humorous stories he shared along the way. I was really surprised because he is a very great and famous person but extremely friendly, approachable and funny.

Thank you to the oxalisadventure.com team for your dedication, thoughtfulness, and professionalism. Thank you to the remaining nine comrades in the “Super Fundy Squad” for the lovely moments, friendliness, and caring that gave me the inspiration to write this article. Thank you all!

Things to do in Phong Nha