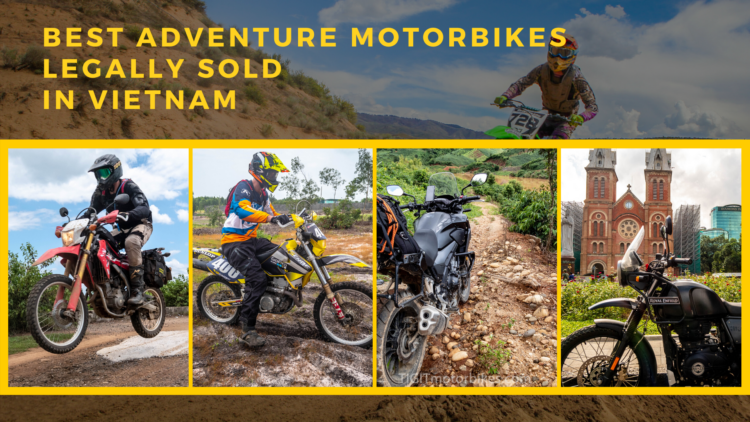 Adventure motorbikes are here in Vietnam and it’s not all 70’s Honda Cubs and derelict Honda Win’s. Expect to see Honda CRF250’s right up to BWM 1200’s. The perfect bikes for Vietnam’s roads and allow for the flexibility to experience offroad trails and spectacular countryside Vietnam is known for. As a rental, they are more competitively priced than the western world’s red taped rules can afford. Not all legal, here’s what you can expect to get your hands on. 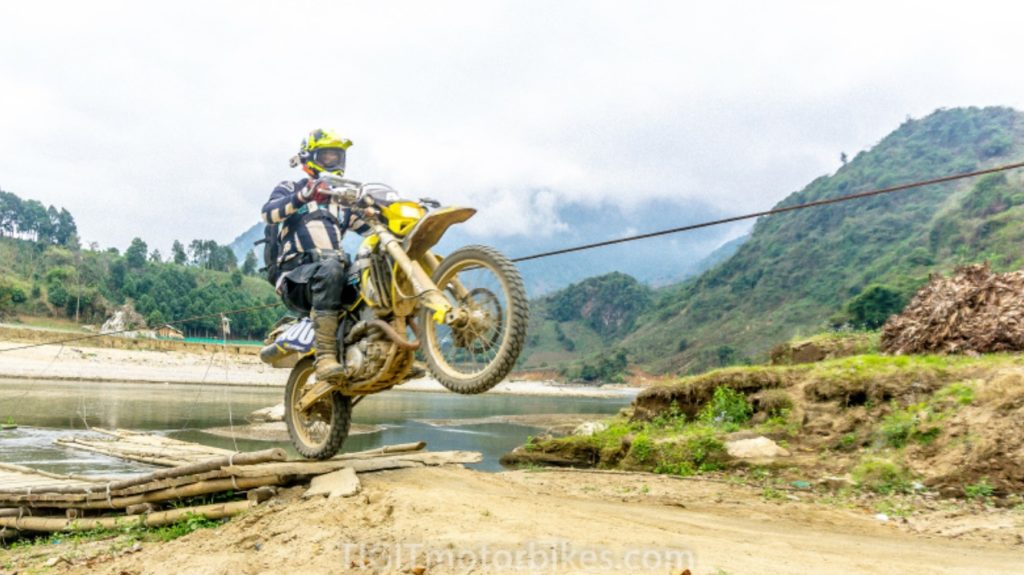 A wheelie so good it should be illegal, just like the bike is!

Why Suzuki DRZ400 Is Illegal and Kawasaki Versys Is Legal

Huge import taxes are levied on motorbikes over 175cc in Vietnam, making it impractical for the average rider to look much outside of what Vietnam is producing for motorcycles. Honda owns the brunt of the local market, but for those who can afford it, all the major manufacturers are setting up shop here. Ducati, BMW, KTM, Yamaha, Suzuki, Royal Enfield, Triumph, and the list continues to grow.

The cheapest imports are brought over from Thailand, but if you’re not interested in a Kawasaki Versys 300 legally imported from Thailand and are looking for something like a DR-Z400 or Yamaha D’Tracker. Craigslist and Facebook might have your Blackmarket beauty for sale.

Illegal “Model X” bikes like this are usually smuggled in from Cambodia without paying taxes at all. The importers generate fake paperwork for the bike and they can be seen running the roads or backroads of Vietnam.

On occasions rarer than a traffic-free day in HCM, one of these bikes was actually imported legally by someone wealthy and has all the right documents. Eventually, the importer wants the next shiny object and this bike hits the open market.

In our opinion, unless you can prove a very legitimate paper trail that this bike was bought in Vietnam, you’ll want to avoid it like a “Free Massage”.

Riding around as a confident foreigner with fake paperwork, generally, you would never need to do more than play dumb and offer up some “coffee money” if the police were to question your papers. As a local, it’s a different story.

Trying to sell the bike on to a local, they know the risk of confiscation by police and that paying regular bribes will eat away at their bank balance and sleep at night. This makes owning the fake papered motorbike a risky investment.

For the extra 100cc, the perceived value for risking no papers has a huge reward. Well, a huge reward providing the motorbike isn’t taken by the police!

What Adventure Motorbikes Are Legally Available In Vietnam

The vast majority of Vietnamese are riding budget bikes like the Yamaha Exciter or Honda Winner, abundant and ideal for commuting. As for the adventure category, a small number of adventure motorbikes make their way to Vietnam and are legally distributed and sold. These tend to be around 40% more expensive in Vietnam than what they would be overseas. The $5000 Honda CRF 250L, turns into a $9000 Honda CRF250L in Vietnam. This hefty price increase is why fake or non-papered bikes are on the roads.

Live in the UK, USA, or maybe Australia? You want to own a CRF250L. Easy, drive to your local Honda dealership and give them roughly $5000 or take the financing plan and ride away.

Live in Vietnam and want to legally drive a CRF250L? The process goes like this:

If you don’t live in the motorbike community, have these contacts and have the funds, you’d never have a chance at owning this bike new in Vietnam.

To understand just how difficult it is to buy a second hand motorbike, check out our article on buying a motorbike in Vietnam. 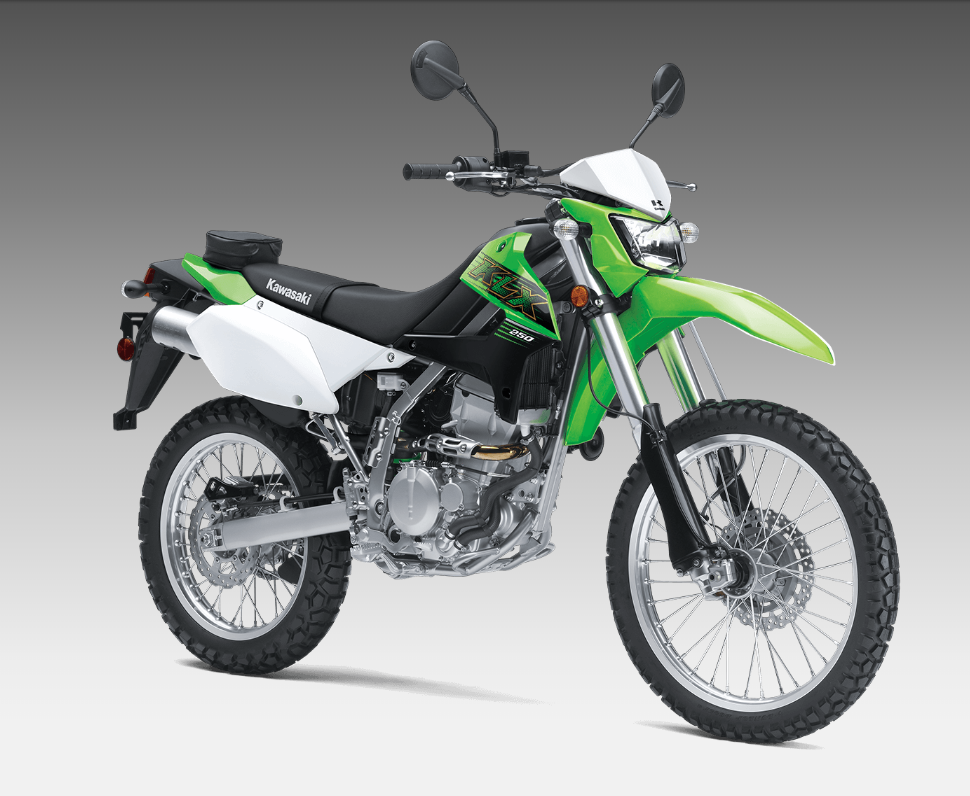 The Kawasaki KLX 250 is one of the most popular dual sport motorbikes world wide. A more aggressive and lighter dual sport than the CRF 250L series.

The KLX 250 has been knocking around in Vietnam for years and is casually sold by Kawasaki directly. At just $6000 new, this must be one of the best value for money motorbikes on the market that is over 150cc.

It doesn’t matter what model the motorbike is, a second hand “big bike” is always worth more than $3000 for the rest of its life. This means the depreciation and risk on investment is minimal when buying the Kawasaki KLX 250. Pick this up for $6000 and sell for $3000 in 10 years, an ROI like this rarely exists in the used ADV motorbike world.

The trade-off is that once Kawasaki sells the bike they have basically zero after sales support. Parts can be sourced via eBay, but Kawasaki isn’t going to install them and these bikes aren’t nearly as easy to service as Honda’s CRF series. 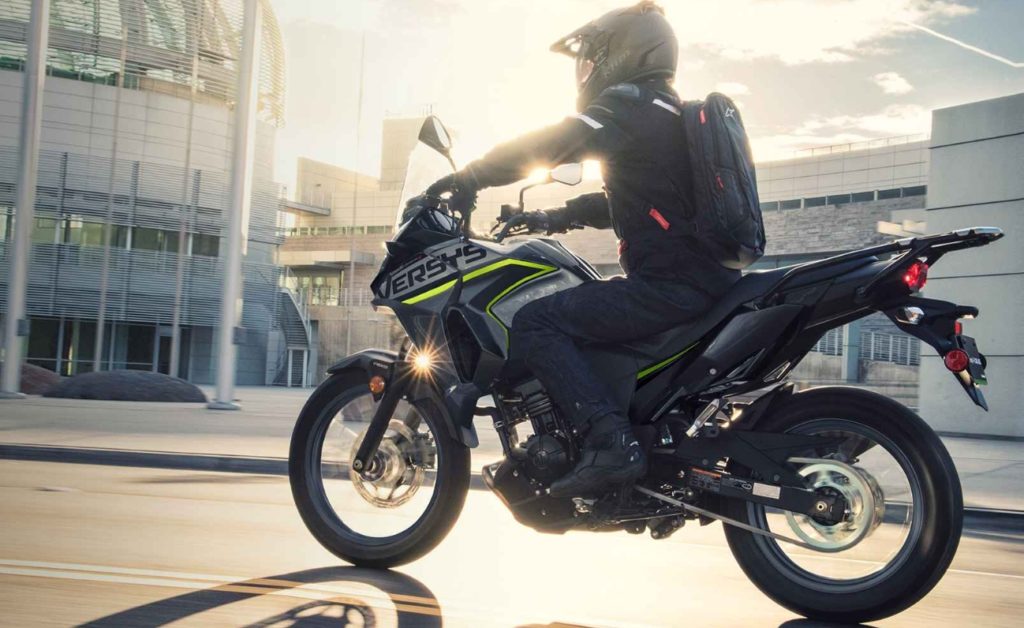 The Kawasaki Versys was heavily promoted in Vietnam and came out with a bang. Then, Kawasaki quickly ran out of stock due to supply problems. It seems Kawasaki got the supply and demand matrix wrong. Either create demand, limit stock and raise the price. Or, stack them deep and sell them cheap.

For $6500, fully equipped with side boxes and crash gear this motorbike is the best value purchase on the market today. Kawasaki’s supply/demand problem turned the Versey’s into a one-hit-wonder. Start humming Rico Suave if you see one riding around. You’ll know what we mean. 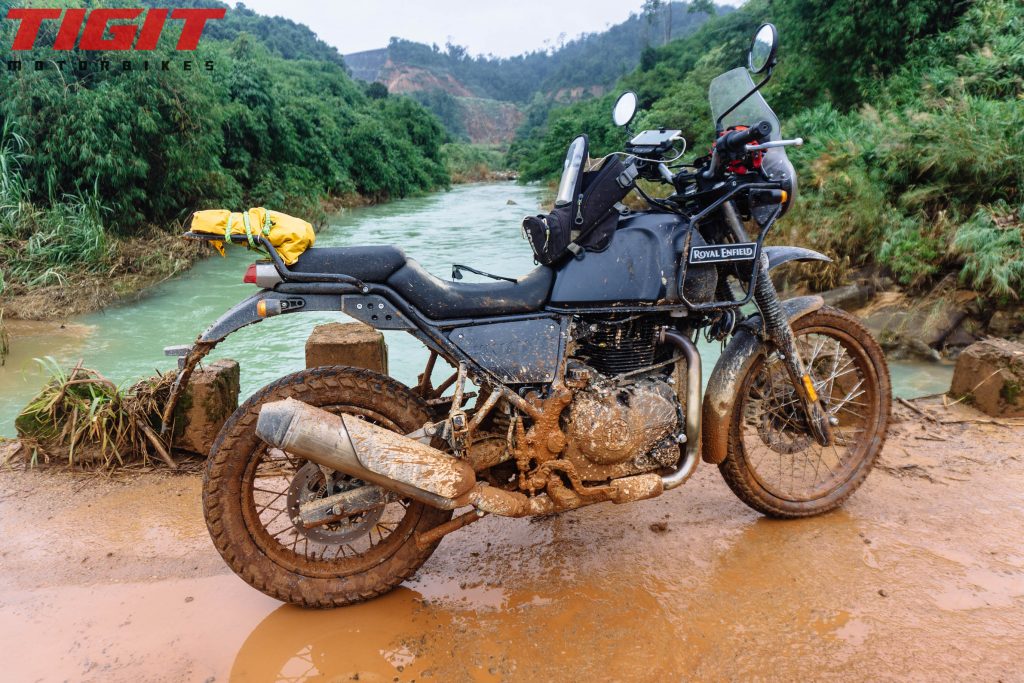 The Royal Enfield Himalayan has caught the eye of the global market. Raising eyebrows and confusion wherever it goes. A classic looking adventure motorbike that is going against all the modern trends.

I love the Himalayan on the roads of Vietnam and took one on a thrilling adventure motorcycle trip through Kashmir. The bike is full of character and fun to drive. The most 50/50 motorbike I’ve found when it comes to road and off-road capabilities. Following the same mindset as Kawasaki’s KLR650, the Enfield isn’t great at anything, but it is also not bad at anything either.

When a flaw like service intervals and recalls are found in bikes like the BMM it makes the news. When you buy a Himalayan you’re likely expecting defects and you’re buying for character. This bike is featured more in news photos than news flaws due to its character and lackluster history. The Himalayan is an open door for conversation and happy riding. I’m sold!

BMW has their foot in the door of Vietnam and is making tracks. With two locations in HCMC, one in Da Nang and one in Hanoi, walking into their showroom is an entirely different experience than walking into any other motorcycle dealership. Expect an air of exclusivity to be wafting through the showroom as you nose around.

With the 1200GS as BMW’s most popular ADV bike, the 310GS is marketed as the lightweight adventure tourer in the GS lineup.

Why it’s easy to love

For transparency’s sake, I have never driven this motorbike. However, at a weight of just 169kg this does indeed make this a very lightweight adv motorbike. This lightness comes from being a tiny vehicle in the first place. The 310GS is David and the 1200GS is Goliath, each has its place battling it out in ADV riding history.

I would say this motorbike looks great for entry level rider or female drivers needing a lighter option to the motorbikes commonly available. If you like BWM and are new to ADV riding, this is a good place to start. 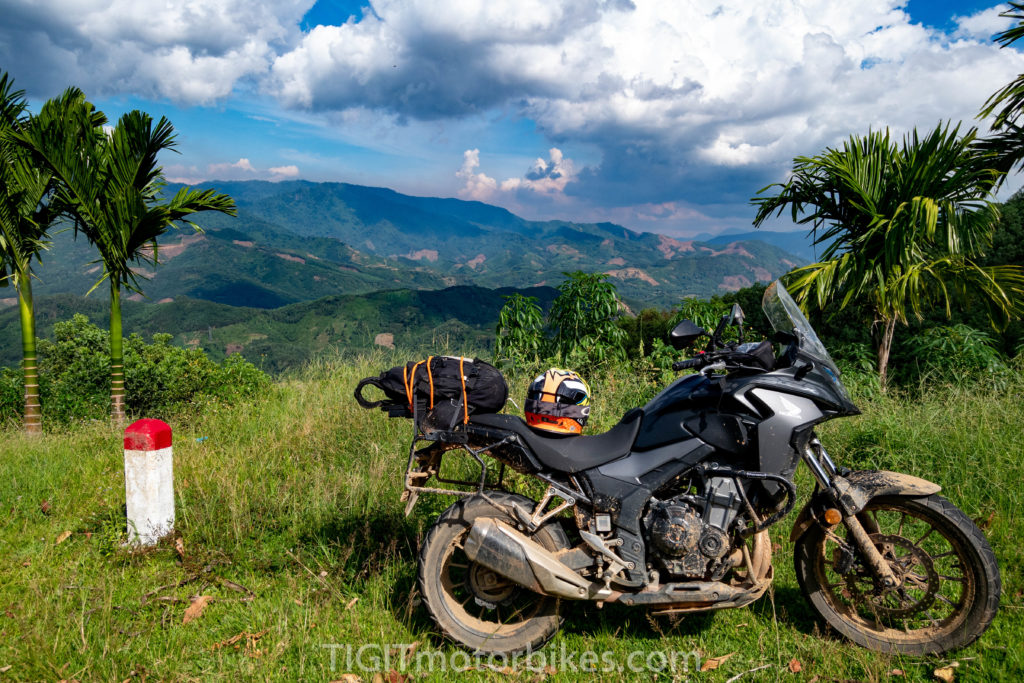 The Honda CB 500x is a relatively new motorbike from Honda targeting the entry level adventure riders who aren’t ready to commit to a bigger bike or higher price tag. Commonly found in matte black with muted silver lettering, it’s a beautiful machine and it is difficult not to admire the image of this motorbike. The price, looks, and adv marketing have this bike popping up across the planet.

If you’ve ever wanted to give one a try this is an excellent country to try one out, Tigit rents the CB500X. These Honda’s are so hassle free and cost efficient over their lifespan, that we have literally fallen in love with the CB 500x and Honda in general. Ride one and you’ll see why.

The eye candy of the global motorbike adventure market, the BMW 1200GS is the number one ADV motorbike from BMW and for good reason. Couples with stylish good looks and as much modern technology as you could pack onto two wheels, there are some definite pros and cons to riding a 1200GS.

Tigit hopes to be the first-ever rental company in Vietnam to offer up this metallic masterpiece. One day soon you’ll be able to ride across the country in premium-style.

No further marketing is necessary, BMW has that covered. If you want to ride this bike we’re here to help. Enquire with us for updates on when this dream becomes a rideable reality.

The choice is limited, but for the adventure motorbike rider, you know it only takes one bike as it’s more about the adventure than the means of transportation.

For the second hand purchaser, shopping in Vietnam is mostly suicide and a lot of people learn this the hard way. The supply isn’t there and you’re going to buy an under-serviced and overused lemon. At least they hold their value when you decide to sell it on.

For those looking for new, buying any of the above models is a far safer and financially sound decision than trying to buy second hand. Where else in the world are you going to buy a brand new ADV bike, ride it like you stole it, then sell it in 10-years for half the price? This is a rare buy and sell market.

If you’re looking to try one before you buy one, Tigit can offer the brunt of the ADV market for rent and even take you out on one of our tours to test these machines in a variety of conditions. Test drive one of our ADV motorbikes for a day, week, month or on tour before investing for the long haul. Honda isn’t going to take back a gently used CRF if you decide the seats too high after dropping it in the mud all day. We will, and we can put into the seat of a CB500X moments later if you want to exercise your options.