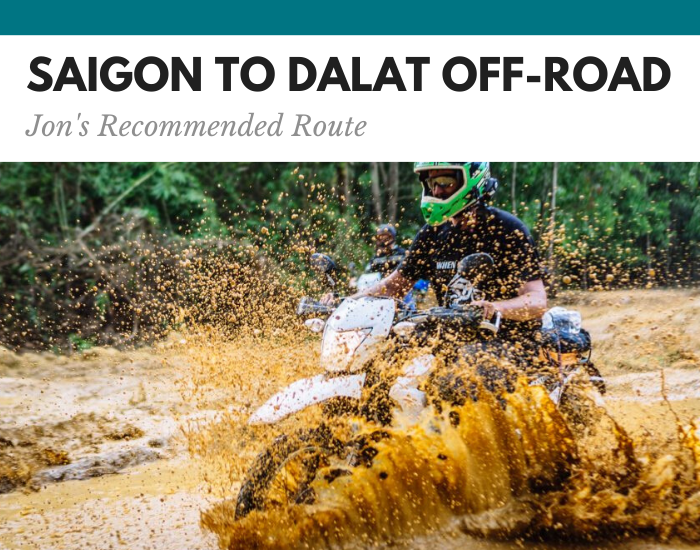 This route is around 70% off-road from Ho Chi Minh to Dalat. This is enough to break most people.

On this occasion, I did the route in two days, but it would be better to do it in three days.  Flying from Dalat to Ho Chi Minh saves 7 hours of highway driving, and allowed for an action-packed two-day off-road route with nearly no road. By the end of this drive, we were begging to be back on hard surfaces!

Interested in learning about the difference between offroad adv & enduro? Check out Jon’s primer here!

Passing through areas that few get to see. Spectacular farmland and mountain terrain that no one knows exists. The roads cut through the middle of nowhere with miles and miles of forestry to either side. A truly stunning landscape, but the focus will need to be on the mud and not the surroundings!

Perks of this route

The Motorbikes we used

I was having fun on the Honda CRF 250cc L. Which can be rented from Tigit Motorbikes at $35 a day.
The CRF 250cc is known to be one of the best off-road motorbikes in the world and its dominance showed through on this route. However, a motorbike such as the Honda CRF 250cc takes some serious skill to wield properly…. something I am still learning when it comes to challenging enduro. As I attempted to tackle this ice driving on clay, I found myself frustrated at my own downfalls when the motorbike gets stuck in the mud. When on a motorbike this good, there is no one to blame but yourself!

David, my good friend was on a Honda XR 150cc. A talented downhill cyclist, but new to the motorbike world. The XR 150cc is light in weight whilst having similar off-road characteristics to its big brother the Honda CRF 250cc. For newer drivers, this is the perfect learning curve. A motorbike that can do anything you throw at it, whilst also being lightweight for times of getting stuck.

Meet up and grab a decent sized breakfast. Once out of Saigon it is down to Vietnamese food, and I find this does not fill me up. So a good western-style breakfast to kick the day off!

In Cat Tien we chose the most difficult and longest trails through the forest. Read our Cat Tien off-roader tour to get a feel for this. Cat Tien is a route and place I have driven many times before. It never gets old, the clay driving is an impossible experience which creates an enjoyable battle every time I have go there.
Flat at as a pancake, but as slippery as ice. This is enormous fun and crashes are guaranteed.

The problem is, some of these swimming pools are twice as deep as the bike! So need to be a bit careful sometimes…. 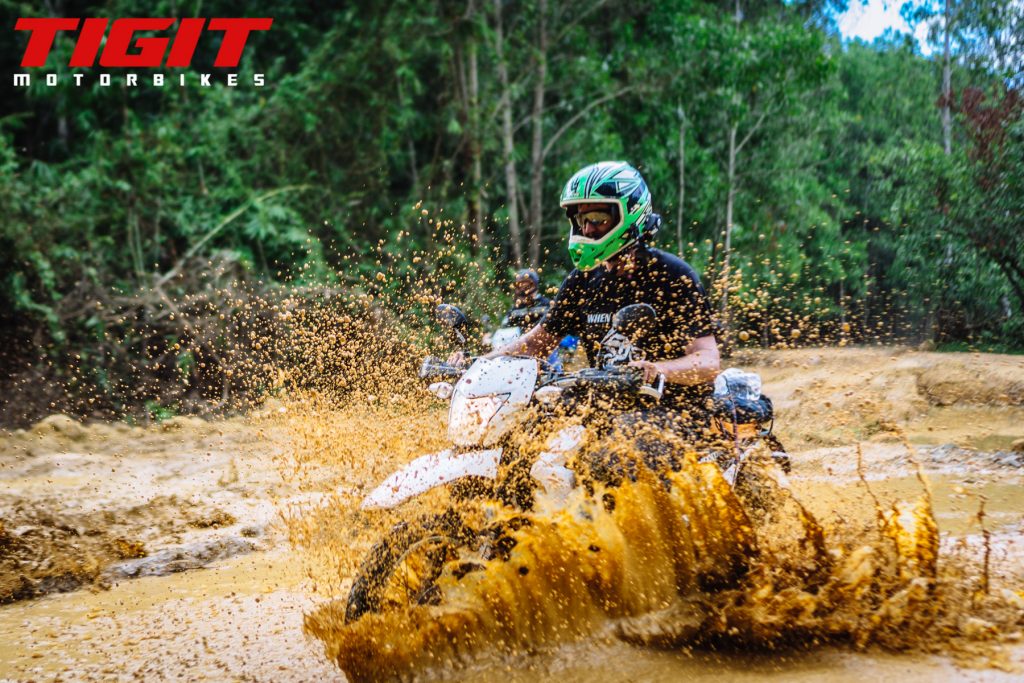 We find lunch and then head off towards Lam Dong district, this can be around 1 hour on the highway

The rain came tumbling down, but we were stupid enough to go and try a “hill climb” that I already new was impossible. I am not sure what I was trying to achieve, as even if we did make it up….. it then descends into a valley which means it is possible to get stuck in the middle. This is a risk that can wipe out an entire day of driving. Boys will be boys though, and competition came into play….. I bet I can get up this hill! (knowing full well that I can’t)

We begin our light off-road drive through the middle of nowhere. This crosses through mountain like scenery comparable to the famous North of Vietnam. Real and authentic farmland with plantations built into the side of the forest.
On Googlemaps, there is no major road or real civilization for miles. We are cutting through the middle of nowhere into places that very few people would bother to try and find. The driving is beautiful, but casual.

We land back on a “real road”, which carves through spectacular mountain terrain. A welcome and peaceful way to rap up the day.

Arriving in a town in the middle of nowhere. A reasonable Nha Ngi house with a surprisingly good restaurant nearby.

Wake up, grab some beef noodles before heading off.

We head off down a mixture of backlanes and gentle offroad. A casual and beautiful start to the day as we continue on our journey through the middle of nowhere.

Stop for a light lunch before heading into the National park. Before heading inside, we decided to take an optional extra of single track tarmac lane through roads built for a dam. A nice addition, but put pressure on the rest of the day as we had a flight to catch at 6pm. We missed lunch and just had harribo (came prepared)…  The adrenaline of the next section put us in survival mode and hunger becomes the least of our problems….

Entering the national park, it became apartant how difficult this was going to be. We reached a river crossing and a very steep hill which I decided was “possible, but very difficult”. It took about 20 minutes of pondering before we attempted to tackle it.  Climbing up the river bed of big ditches on clay terrain is no easy task. The end was never in sight and the hill just went up and up. We pushed eachother up for what seemed like an eternity. Beaten and tired we eventually reached the top!

Around half way up the hill we realized we had taken the wrong road. This is why it was so difficult!

We battle with the national park, we battle hard. This narrow mud track has been carved through the mountain by river water and small tire tracks of the Vietnamese semi automatics. Our big Honda dual sport bikes fight with the clay and the little tire tracks create a very tiring arm wrestling experience. On normal terrain an off road driver could gain speeds to fly over these tracks, but on clay you will find yourself repeatedly falling into ditches created by rivers. The annoying tire tracks created by smaller motorbikes will eventually wear you down and your bum is likely to be firmly planted on the seat. A position you do not want to be in when off-roading.

The final obstruction is a river that for some reason the locals appear to not have built a bridge over. In times gone by I have had to pay locals to carry the bikes over this river. With the wrong conditions this may be impassable and remains a question mark every time I tackle this route. Once over the crossing we stop for a drink. Our first sign of real civilization! This random village is so random that it does not exist on google earth. This road does not exist either!

The road slowly gets easier and the pace we cover ground increases. After the drink, the world seems a better place…. energy has been restored and the roads are suddenly drivable.

We have completed the national park and now find ourselves on a superbly crafted road that winds its way down to Dalat. The kind of drive that a road bike is designed for. Meandering corners of perfection. Unfortunately, we clumsily wobble our way through this perfect road on our clay stamped dirt bikes. Tired and beaten, it can be hard to judge the cornering speeds and you suddenly realize that you are in no condition to continue driving. No worries, we have a flight to catch!

We made it in such good time that we were able to dump our motorbikes in a washing place whilst we grabbed some Pizza!

Finally, we drive down to the bus station, drop the motorbikes off and head off to the airport.

6pm flight Dalat to Ho Chi Minh, I am back home by 9pm. What an amazing two day trip!

Things to do in Dalat

A Guide to Dalat Waterfalls by Motorbike