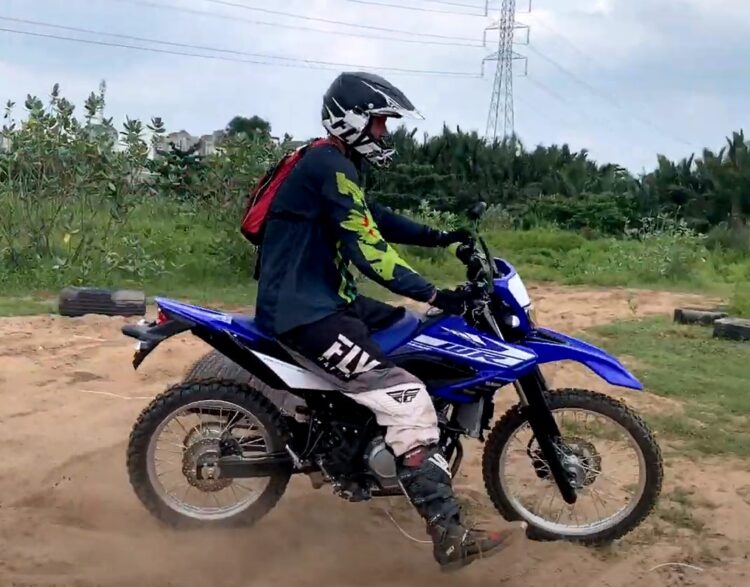 To have three motorbikes like this side by side is a fascinating experience. They are similar, yet very different. Between $500-$600 separates each motorbike, making the Honda XR 150 (cheapest) roughly $1000 cheaper than the Yamaha WR 155R (most expensive).

The 150cc dual-sport segment is interesting because it only applies to a limited number of countries where the 150cc’s are popular. However these limited set of countries can be argued to be “motorbike countries.” The motorbike can be seen on the road more frequently or at least to a similar level to the amount of cars.

In Vietnam the 150cc bracket is due to the regular license allowing 150cc and below, meaning anything above 150cc needs a separate license. Motorbikes above 150cc also have strict import regulations and get hit hard by extra taxes. I don’t know the reasoning in countries like Thailand, Indonesia and India, but the 150cc motorbike bracket is common in those countries as well.

Do the 150cc dual-sports hold their weight against Japanese thumpers?

Considering a Yamaha WR 155 costs around 4,000usd, I don’t think these motorbikes have a purpose in the normal western world where they would be competing with $6000 Suzuki DRZ’s or $5000 Honda CRF 250’s. The second hand market for old and reliable Japanese motorbikes leaves these 155cc’s with very little room for value. But in countries that are focused around the 150cc bracket, there is a huge amount of purpose to them.

The main difference is the way they drive. The Honda XR 150 and CRF 150 feel like toys. When I define a toy, I am comparing it to what a proper offroad or dual sport motorbike should feel like. Motorbikes shouldn’t wobble around with boat-like handling, the suspension shouldn’t be bottling out over small jumps, and the motorbike should be giving the driver a sense of confidence.

The XR 150 is a fine motorbike. It is reliable and it can do anything that you throw at it. If you want to take it on a journey across Vietnam, it is a great choice. If you want to mess around in the mud with your friends, it can do that as well. However, if you want to improve your driving and learn new techniques, the XR 150 will hold you back. You can’t drive it like a proper motorbike, because it isn’t.

Where the XR 150 excels is in the seat department. It has a fantastic seat for both the driver and the pillion, and I would put the XR in the category of “Adventure Motorbike”, where it is primarily for road use with a hint of offroad capabilities.

It remains to be the best 150cc motorbike for the job of travelling across Vietnam due its comfort.

When it comes to a long journey, the seat lacks in comfort compared to the XR. It also has nearly no setup for the pillion driver.

For a time the Honda CRF 150L was the best offroad based 150cc motorbike in Vietnam, but it has now been swallowed up by the Yamaha WR 155cc. In my eyes, the Honda CRF 150cc finds itself in no mans land. It isn’t tackling any discipline to a good enough level to bring any value.

The Yamaha WR 155 is doing everything perfectly, just with no power. It has 16hp which is considerably more than its rival Honda XR 150 and Honda CRF 150, but when comparing it to a 250cc+ motorbike, it is severely lacking in this department. In all other aspects however, it shines like a bright star in the sky.

The Yamaha WR 155 comes with six gear transmission and it glides on the road. It is actually fun and pleasurable to take this motorbike out on a road based journey. Famous Dual-Sport motorbikes such as the Suzuki DRZ 400 are actually quite challenging to handle on the road. A reasonable amount of power under your belt combined with a semi-off road setup creates a fairly scary combination for tarmac. Owners of big dual-sport thumpers rarely talk about it, but these motorbikes tend to wobble around on corners in a fairly cumbersome and scary fashion.

The Yamaha WR 155 seems to find a great balance where it is firmly planted on the tarmac with a very manageable power band. A super light clutch and speeds that cater toward the spongy brakes of a dual-sport that has no ABS.

In the countries that are targeting the 150cc motorbike bracket, there tends to be a suicidal approach to traffic laws and driving styles. Vietnam is known to be one of the most suicidal places to be driving, with locals coming from all directions at all times. Having control over the motorbike is far more important than raw power, and with this Yamaha WR 155 it is the first time I have found myself on an offroad capable motorbike that isn’t going to kill me when taking it onto the road.

Comparing the Yamaha WR 155cc to bigger and better bikes

The Yamaha WR 155cc is in a world of its own when comparing it to the Honda XR 150cc and the Honda CRF 150cc, so how does it compare to the bigger motorbikes like the Honda CRF 250cc.
In countries with big open roads and “road rules”, I don’t think the Yamaha WR 155 has a place in the market.

Sitting here writing this article in Vietnam, I have a Honda CRF 250cc and a Suzuki DRZ 400cc sitting downstairs. I am truly having an internal mind battle as to which motorbike I would take out on my next Dual-Sport based journey.

The Honda CRF 250L is out of the question, it has no power and it weighs a whopping 148KG.

The Suzuki DRZ is amazing fun to drive, I love the noise and I love the power, but it terrifies me on the roads. Also weighing in at around 148KG it creates a tiring off-road journey with intense amounts of manhandling to control the large beast.

The Yamaha 155cc brings the excitement down to a bare minimum, no popping the clutch, no rawing power and no noise. But I feel contempt with the idea of an easy to handle motorbike that will get me over the road and through the jungle with minimal drama and minimal effort.

When push comes to shove, I think I would still go with the Suzuki DRZ 400, but the Yamaha WR 155 comes in a very close second.

I emphasize the concept of the location you live being important when looking at these motorbikes. Driving in America or in Europe is a very different game to driving in Vietnam. If you have not experienced how the roads work here, I fully recommend a guided motorbike tour.

One of the big hypes around the Yamaha WR 155 is its release in India. When it comes to tackling the beautiful Himalaya’s, India is currently dominated by outdated and unreliable Royal Enfields.

On my recent trip to the Himalayas we used the Royal Enfield Himalayan 400cc, I would have gladly replaced it with the Yamaha WR 155cc.

A chance to pop some wheelies, do some proper offroading and wield around a fun lightweight motorbike on some of the best terrain in the world.

An 18 inch back wheel and a 21 inch front wheel with innertubes and tires that should be found in local mechanic shops.
This is compared to the very boring Royal Enfield Himalayan 400cc with a 17inch back wheel where no mechanics have tires or inner-tubes. The Royal Enfield Himalayan is known to be a fairly unreliable machine where pieces fall off the motorbike as you go, this is not something you want on a 4000 metre high mountain.

The Yamaha WR 155 could be argued to be the very best dual-sport in the world when it comes to countries with reckless driving and subpar roads. It is a very much needed release in India and I think it might be a game changer for the motorbike tour industry there. Tour companies are struggling to maintain the useless Royal Enfields dating back a thousand years, and the Royal Enfield Himalayan has been so disastrous in terms of reliability that most companies are too scared to move to it.

The Yamaha WR 155 will bring a breath of fresh air to India, and its release has put the Himalayas back on my travel list. 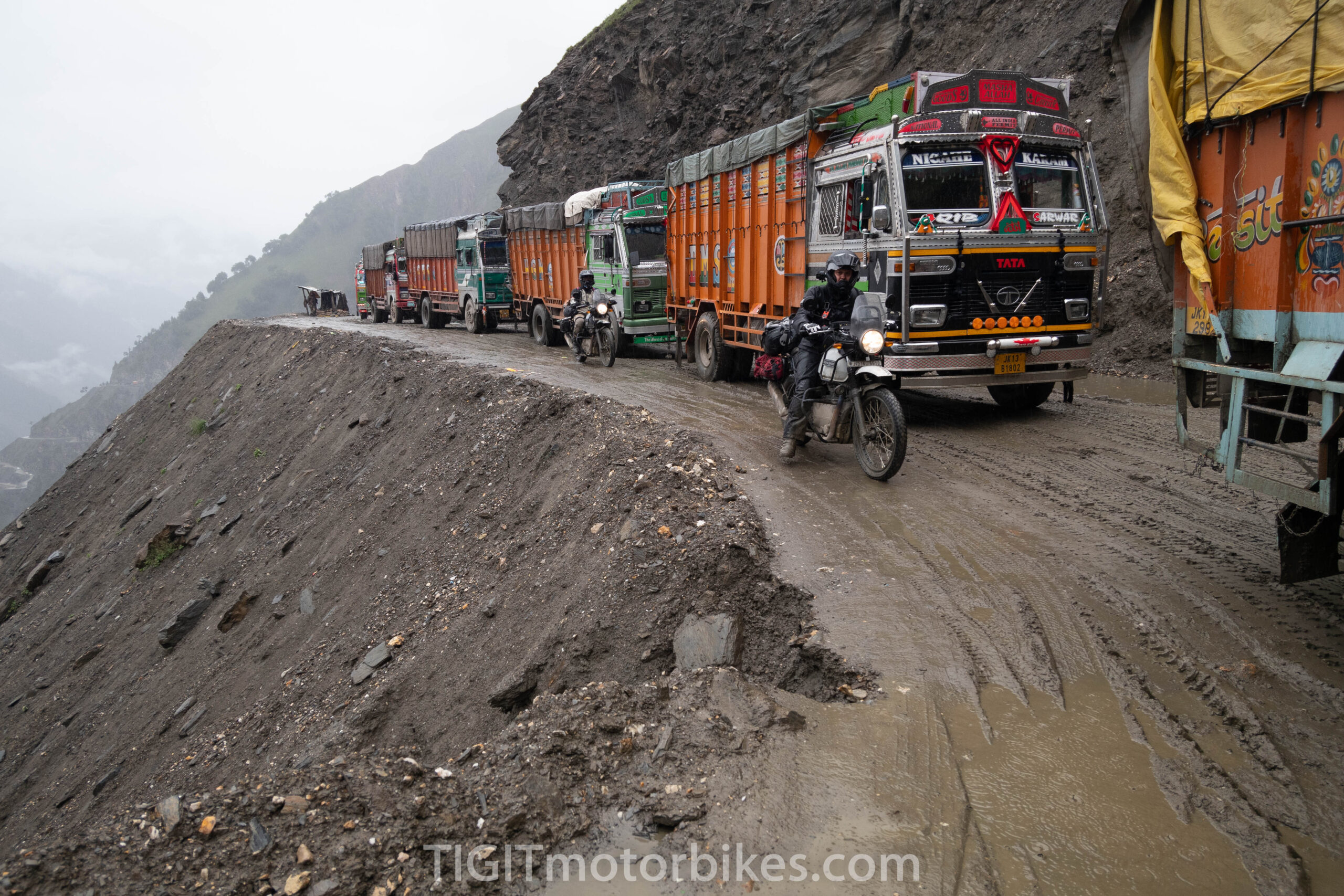 Learning to offroad on the Yamaha WR 155cc

It felt lightweight, it felt well put together and it didn’t wobble around. The only area it was lacking was in the power department.
Considering how tame but well put together this motorbike is, I think it might be one of the best platforms for an entry level offroad learning experience.

People underestimate the importance of weight when it comes to offroading. Learning to offroad on a 150kg+ monster is not particularly helpful. Try and get the weight down to a manageable level by using a KTM or Husqvana and you find yourself with an explosive and unmanageable engine underneath you.

There hasn’t been any “good quality” low powered motorbike for offroading up until the release of this Yamaha WR 155.

None of these motorbikes have official distribution in Vietnam. When buying a motorbike (in any country), it is important to be able to source parts. This is either through a local dealer near to your house or through websites such as Ebay or Partzilla. The XR 150l is made in China, and the Yamaha WR 155 and CRF 150L are made in Indonesia. None of the motorbikes have any official reference or source to part numbers. This means maintaining any of these motorbikes is going to be an absolute nightmare. If you break a piece of plastic, what do you do? When you need a new sprocket set, what do you do? Unfortunately this is a horrible reality of buying motorbikes that are not aimed at global distribution.

In Vietnam, the Honda XR 150L has become popular enough that the size of our fleet has justified our time to figure out where to source parts and which random parts fit on the motorbike from other motorbikes. This is a time consuming and difficult task that has taken years to master. It is not something where you can pop onto a youtube tutorial and listen to a random blogger talking rubbish about how easy a motorbike is to maintain with no official part distribution. For people in Vietnam, companies like Tigit mean that the Honda XR 150 can be maintained (through us). Unfortunately the CRF 150l, although Tigit has four. this part issue stopped us expanding the fleet. We can’t maintain the motorbike.

People on the internet will say the Yamaha WR 155 shares parts with the Exciter or other low capacity local Yamaha scooters, but good luck figuring out which exact parts!

Is the Yamaha WR 155cc worth its price

I believe the answer is a solid yes, providing money is of no concern. It is the very best low powered offroad capable machine. This makes it the best motorbike for learning on. It is also the best aggressive dual-sport motorbike I have ever driven. I am talking about riders who use the road as a means to find offroad.

If money is a concern, then you should skip the Yamaha WR 155, and go and find yourself an old thumper dual-sport motorbike. You will never upgrade, because you don’t really need to, and you don’t have the money too. But you will eventually learn to manhandle the heavy beast both on the road, and off the road. Your Japanese dual-sport will remain with you for the rest of time.