This is going to be a little judgy. But if you’ve lived in Vietnam long enough, I’m sure that there are times you just gather around with your gang in a little local coffee shop on a Sunday morning,  just for trash talking and judging on people around you. So today’s topic is about how your motorbike of choice reflects your characteristics:

If you’re driving a “Honda” Win…

You’re a backpacker with shorts, tank top and a big backpack on the shoulders. You NEVER spend a day in a mechanic shop because your bike NEVER BREAKS DOWN. You only use orange bungee cords. You spend the day with beer and weed and doing nothing. You have no money but you also managed to get scammed during most of your trip, but still love it in the end.

No worries, poor life choices can be shrugged off with another beer! 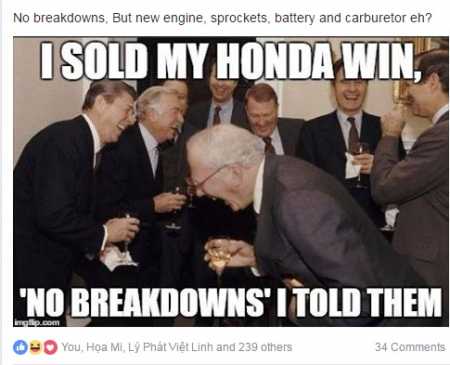 Perfecto! You’re that nice guy in every movie we see. Don’t worry, there are many fish in the ocean.

Time to upgrade to something fun and faster? Say a manual?

You’ve got a Nouvo

You’re new to motorbikes and Vietnam chaotic-as-f*ck traffic but somehow you managed to pick the worst automatic bike ever. You’re gonna fall to the NOUVO BREAKDOWN PIT where you get one thing fixed and another breaks down simultaneously. You’re gonna be late for work, piss off somebody, get traumatized,  and wonder why you ever came to this goddamn country. You feel cursed that life never goes as planned, but don’t worry, it will get even worse when the rain comes. Just hang in there until the sun shines again and a new year begins!

They’re just re-release the Nouvo with a new name: NVX!!! 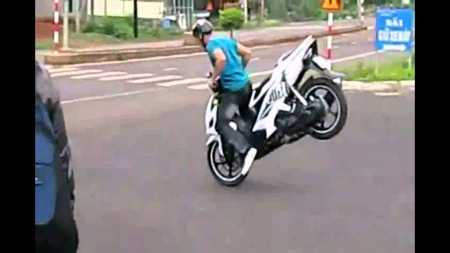 You drive an Airblade

You’re the Family Guy! Got (at least) two wife and five kids, and “space under the seat is the utmost importance because 5 helmets need to fit in there! And I need TWO disk brakes! Because the airblade is THAT FAST!!! No gear lever, cause my shoes cost more than 2 Airblades.”

“Airblades are great! But why don’t they rent PCXs? I’d love to have a PCX. I need a big bike!” 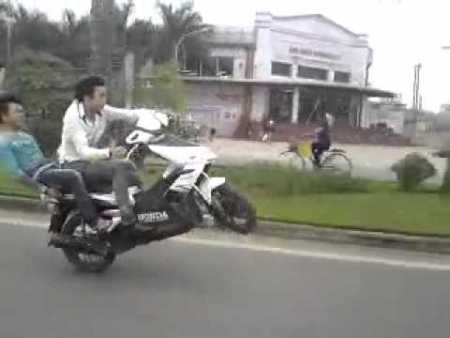 You drive a Manual scooter!

You’re usually late, because you want everyone to be there first so they can here you vroooooooooooom in from 200m away, and make an impressive entrance. And, to be honest, who drives manual at 40kmh? (except honda wins). Your right arm is ripped with muscle since you’ve been twisting that throttle 1000 times, at every red light in the city. And you’re suffering from hearing loss, because that loud pipe is still not loud enough, after a few months.

You’re the absolute nice guy that everyone loves! You’re in no rush for anything yet you always come on time! You enjoy your life at a leisurely pace. You’re either a girl or a fat guy ( sorry 🙁 ) . You’d rather order food than eat out. You’ll take an Uber instead of your Cub for something 10km away because your Cub has a 9km working range. No, you don’t take passengers, not because you don’t want to, but because there’s no seat left(!)

“If speed really kills then the Honda Cub drivers will live forever!”

“Helmets? Nah you don’t need those.”

You got shitloads of money and bikes are the only thing you’re interested in. You don’t give an F about cops and laws. You know how to do a wheelie. You wash your bike yourself. You’re a guy with a lot of bling-blings

“Hell no, those damn washing guys gon’ scratch my bike!”

“Yeah these two strokes are awesome that’s why I have ten of them. Only like 100mils each. Best money ever spent!”

You’ve got a Super Dream

You’re either a local or you have lived here long enough to be considered as local. YOU CAN SPEAK DECENT VIETNAMESE!

Congratulations does not matter how you swing it, if you have a Dream then YOU HAVE TO BE A LOCAL.

Honda still sells Dreams, but they don’t come cheap. Buy a dream for sentimental reasons rather than practicality.

You drive a Suzuki GN125

You’re a stud, but a broke stud.

You’ve got strong arms and legs since you push your bike home once a week. Your bike is loud, your music is loud, your life is loud. You need a bit more noise to get people out of your way, go to press the horn, but… it’s broken again.

You are a sensible adventure seeker who understands that Honda is the only motorbike company that deserves your hard earned cash. You hate the “Honda” Wins. You hate those race-kart scooters like Exciters and Winners and you hate anything or anyone that does not have a Honda motorbike. You wouldn’t dare to taunt those Yamaha and Suzuki boy racers though, your excuse is “I only ride offroad fast, and I’m a responsible driver when in town!” Kudos to you 😀 . Who cares, they are just riding toys, it is you that is driving a REAL MOTORBIKE! The Xr150  s̶e̶p̶a̶r̶a̶t̶e̶s̶ ̶t̶h̶e̶ ̶m̶e̶n̶ ̶f̶r̶o̶m̶ ̶t̶h̶e̶ ̶b̶o̶y̶s̶  (people!) 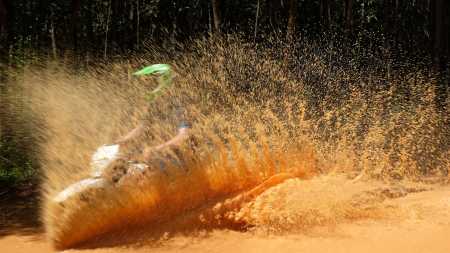 You have a CHALY

You’re a girl who knows nothing about motorbikes. The bike was given to you by that overly friendly guy who was trying to get in your pants. You accepted the gift without realising the situation. Now you are left with a 2 wheeled vehicle from someone that was your part time X boyfriend, and you don’t know what to do with it!  It is the end of the line for this bike, its going to end up stuck in the basement for all eternity as it reminds you of a past that needs to be forgotten.

That’s all I can think of for now. Still, there’s a lot of bikes that need to be on this list but gotta need ideas for that.

Written and created by Link.

The 40 Best (and worst) Motorbikes in Vietnam