With such a variety of travel experiences & offerings to draw people in, the best time to travel Vietnam can mean different things to different people. Weather, festivals, holidays, costs, potential savings, and your personal schedule can all play factors on your decision making.

The best time to visit Vietnam could be any time of year, and will explain why.

Typhoons, monsoons, sunny days at the beach, warm jacket weather, each of the countries regions offers up something different and at different times of the year. The best time to visit Vietnam and Cambodia, if you’re headed that way too, are March & April. That is a vast generalization, but you can roll with it to help with your decision making.

Full details to the weather in Vietnam, including rainfall, average temperatures, and regional locations. Check our related post on the comprehensive guide to Vietnam Weather.

Hanoi and the North is the coolest part of the country with temperatures reaching near freezing in some parts during the cold months of November through February.

Central Vietnam is the region that covers everything from the Central Highlands Route and up along the coast stretching from Hoi An to Hanoi.

Southern Vietnam flows down from Hoi An, past Ho Chi Minh City to the southern tip of Vietnam. This region is generally cold beer or ice cream weather. December to April are good times to visit, with May being peak ice cream melting season. Hot! 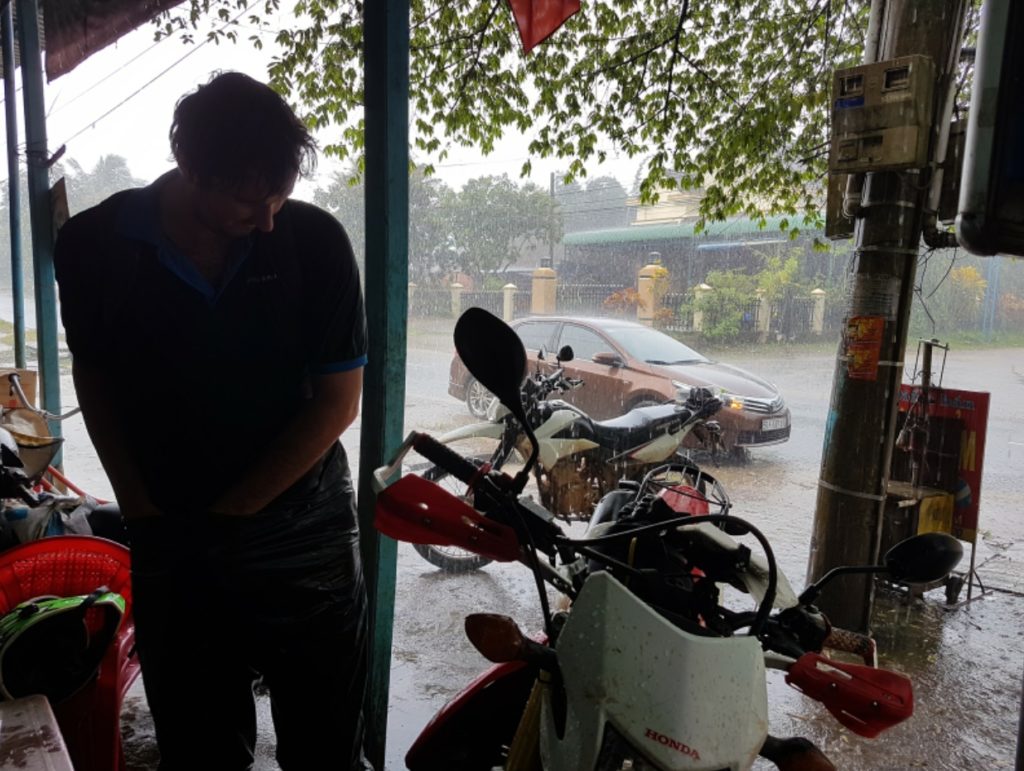 If you find yourself on a motorbike adventure in the monsoon season. Rain gear and spare clothes will be your best friend.

Typhoon season in Vietnam is one that can be generally planned for. As offshore storms brew and blow their way westerly into the country’s coastline. News reports will provide plenty of warning about where and when to expect a typhoon, making it easy to plan for.

As a country-wide generality, typhoons can happen between August and December with the most action happening in October. This isn’t to say that you’ll see any typhoons at all or that you’ll see them every day. It’s just more likely in these months and even more likely along the coast as the storms build over the ocean than dissipate as they hit the Truong Son mountain range.

For this or any of Vietnam’s variety of seasons it’s important to know what to pack and wear. Shorts & sandals are a must, but don’t let yourself be fooled into thinking that this is all you need.

Monsoon season in Vietnam is a good time to be more flexible with your travel plans. The monsoon rains can last for hours or days flooding out towns and roads. This leads to brief delays while things clear up.

In the North, the peak of the rainy season is May–October. In the central regions, the wettest months are August–December with October & November taking the brunt of the downpours. In the South, May–October are generally monsoon season with June enjoying most of the rains. Then for anyone traveling inland to areas around Pleiku May-October are the wet months.

The typhoon and monsoon season double as the low, May-September, tourist season. If you’re looking for travel deals, cheaper accommodation, off-road adventure, and the chance to visit some of Vietnam’s top tourist sites, this is the season for you. 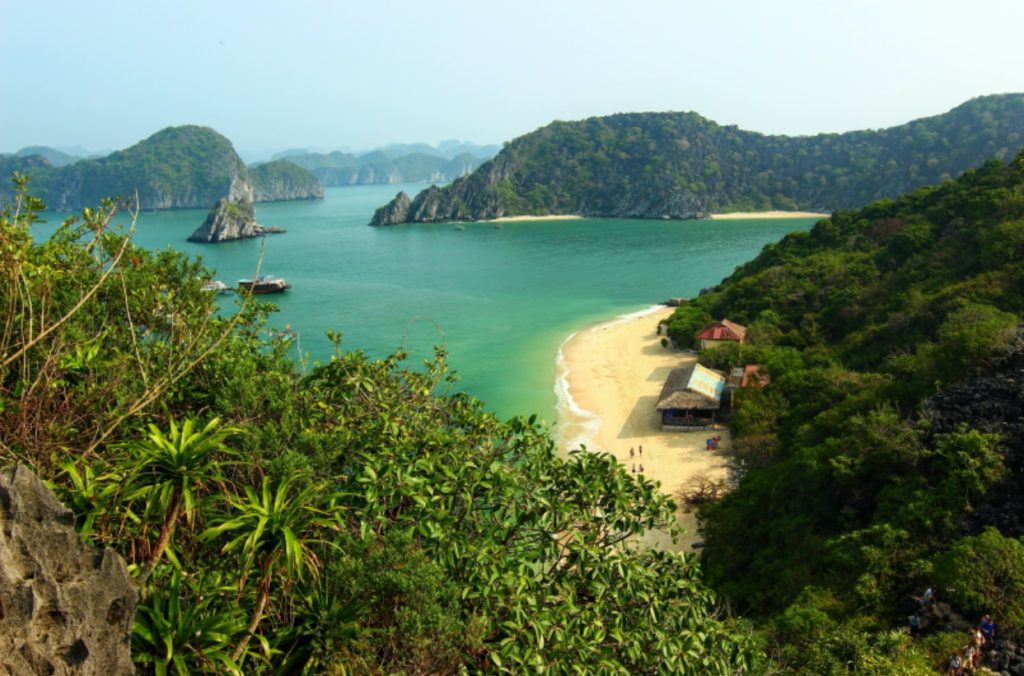 For most travelers finding the beach is top of their list. Vietnam has plenty, come and explore.

The south of Vietnam and around the Mekong Delta is nearly always hot with December-February in the 20’s and low 30’s, March and April temps stay steady in the ’30s, and the added humidity of May brings things up into the ’40s. Ouch!

In central Vietnam, the monsoons play a significant factor in the weather, beach bunnies will have the best luck from mid-January to the end of March. This time of year is dryer with temperatures hovering around the mid 20’s. Not too hot, not too cold, just right!

Anyone venturing into northern Vietnam is probably lost if they are exclusively looking for a beach vacation. However, if you are touring Hanoi and the North and just looking for some relaxing days near the coast around Hai Phong. November/December and March-April are the driest warm months of the year, with temperatures in the high teens. 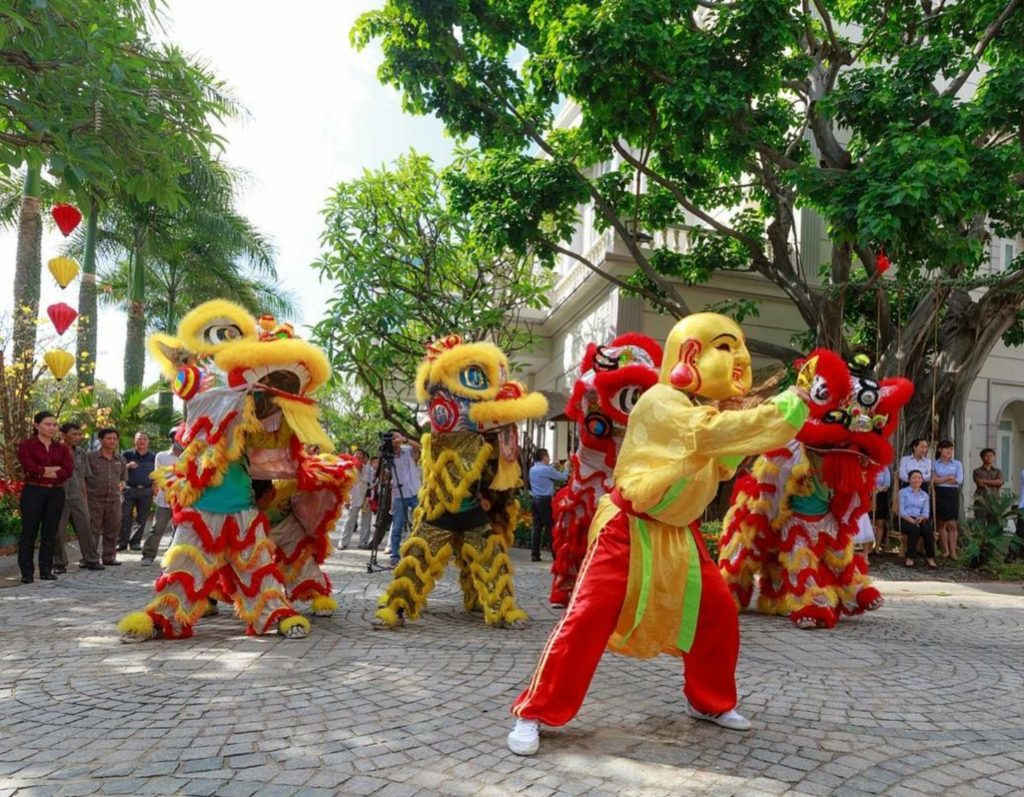 Image: @hellobeautifulworld_reizen   – The Tet festival brings the streets of Vietnam to life in vibrant colors and dancing dragons.

Festivals and Events In Vietnam

Tet Holiday Vietnam – January or February welcomes Tet, the biggest celebration in Vietnam that needs to be both abbreviated and translated to make sense. Tet is the celebration of the coming of spring and typically lands on the same day as Chinese New Year, based on the lunisolar calendar.

Reunification Day – April 30th marks the day when northern Vietnam forces captured former Saigon and reunited the country as a whole. This day signified the end of the Vietnam war.

Labour Day Vietnam – May 1st, known locally as Ngay Quoc te Lao Dong, a day that has brought awareness to the countries labor force since 1913 and allows for a day of rest and celebration with family and friends.

National Day – September 2nd is the recognized day that historical leader Ho Chi Minh read the national declaration of independence to the people of Vietnam. This might be the best time to visit Ho Chi Minh City if you like cultural events.

Mid-Autumn Festival – September or October depending on how the 15th day of the 8th month to line up with the full moon. Also dubbed as the Mooncake Festival, families and friends can be found sharing Mooncakes as part of the celebration. This pastry-style treat can be found in a variety of filled forms like sweet bean or lotus seed paste. Check out #mooncakes for a visual feast.

Other Recognized Holidays – December & January can garner the same international excitement for events like Christmas and New Years that are recognized in the western world. Stick to the popuar toruist destinations if you’re looking for a party. 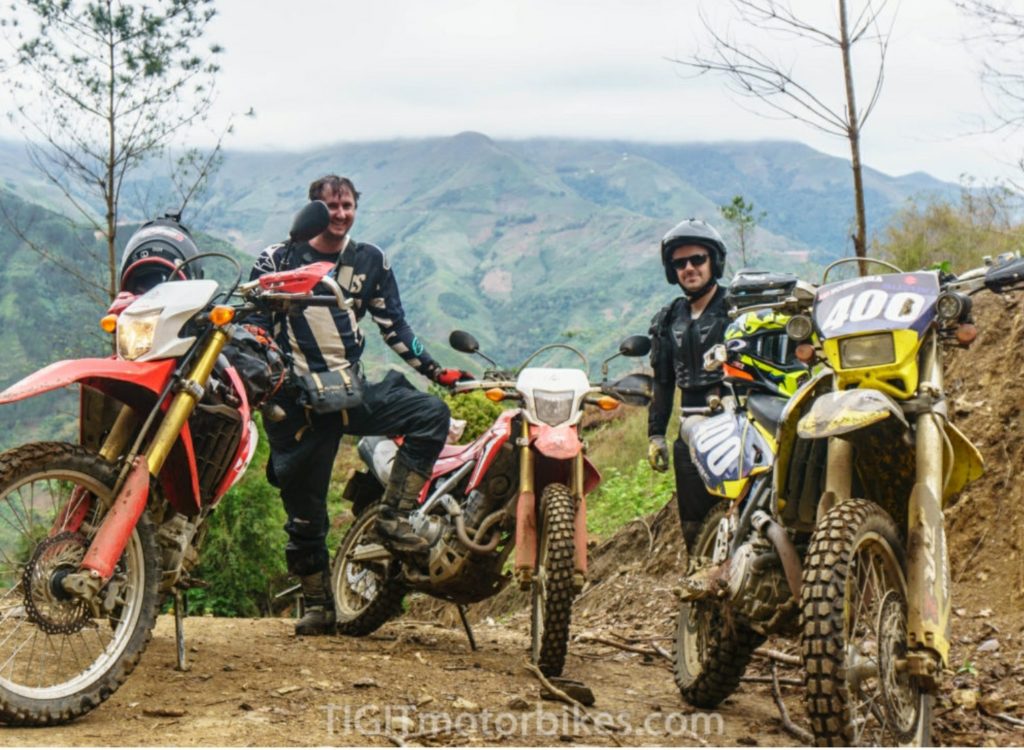 Dirt, mud, & sun. A Tigit motorbike rental can take you nearly anywhere in Vietnam through nearly any conditions. Come prepared for a life-changing adventure and we’ll help you plan the rest.

The moral of the story is ANYTIME IS THE RIGHT TIME TO TRAVEL VIETNAM. Pack for the appropriate climatic conditions, arrive with an adventurous attitude, and be flexible with your itinerary, knowing most problems can be easily solved by the end of the day.

For those of you ready to pull the trigger or yearning to know more. Check out the related posts below;

FAQ. The most popular questions answered.

How To Navigate Vietnam By Motorbike

Back Of The Bike Tours. An Exciting Alternative With A Personal Tour Guide