The traditional Taxi of Vietnam, the “Xe Om”

The Xe Om was the mode of transport in use before the traditional Taxi came along. The Xe Om was so unique to Vietnam that it became an icon of the country. Nearly every street corner had  Xe Om drivers chilling on the side of the road. These guys knew how to chill, head on the seat and feet on the dashboard with a cigarette in one hand and a beer in the other.

If they are not driving the Xe Om will sell various other services, usually in this order they will gently whisper to passers by “Motorbike, Marijuana, Lady Massage Boom Boom”. A very useful one stop shop of several important services.

Xe Om drivers live and breath their job, the motorbike is their house and home. They are on those motorbikes day and night and available 24 hours a day for any of their three services on offer.

Unfortunately Xe Om drivers hugely suffered from what every expat in this country has come to know and understand. Vietnamese business tends to be short sighted and fails to see more than 5 minutes into the future. “Repeat business? Ha, what is this madness! Money, Now!”
The Xe Om driver was about as dishonest as it gets.
A journey with the Xe Om was a negotiation in terms of money and in terms of your life. Regardless of the amount agreed ahead of time, the Xe Om would frequently claim the journey was taking longer than expected and stop the motorbike in the middle of the road for a re-negotiation of the price.

Finally, the Xe Om has an issue of having no idea where anywhere is. Ironic that someone dedicating their lives to being on a motorbike should be so clueless about the districts of the city they are operating in. Xe Om drivers never got you to where you want to go without asking hundreds of passers by for directions. An experienced local / expat will know to interrogate with detailed questions about if the Xe Om actually knows where your destination is. “Do you know where the opera house is?”, “Yes, yes, yes, yes”

Fights were common and the Xe Om acted as a miniature mafia.
For a local it was difficult, for an expat is was very difficult, and for a traveller it was impossible.

Money comes to Vietnam and the car Taxi comes into play

Vinasun took the helm and led the way in “nearly honest” business practices which is a rare thing in Vietnam. A Vinasun Taxi may or may not take you in circles before reaching your destination but at least with Vinasun there is a hotline to complain to. Taxi drivers had name tags and unique Taxi codes and it is possible to get some payback on these dishonest drivers. It seems Vinasun have some sort of recruitment process and the drivers are generally polite and honest.

Mai Linh Taxi group has kept Vinasun from a monopoly and offered a very similar service on a slightly smaller scale. For a time, VinaSun taxi’s were absolutely everywhere and they were the easy choice to get around. If a Mai Linh Taxi came about, it was a scramble to get in the green Taxi as they were reputable whilst being significantly cheaper than the VinaSun competition.
Vinasun are not cheap and a short journey can quickly rise over 200,000vnd (10usd) which is a lot in Vietnam.

Along comes Uber and Grab

Uber and Grab took Vietnam by storm and it was about as predictable and easy a take over as could possibly be. Traditional Taxi companies quickly crumbled to an all-round better service and the years of bad and short sighted business caught up over night.

The warning signs for the traditional Taxi companies were there nearly 2 years prior to Uber and Grab arriving in Vietnam. Everyone knew what was coming but there was no shift in the legitimacy and honesty of the leading Taxi services. VinaSun have been good in relation to Vietnam’s generally shocking business practices, but compared to the outside world they were light-years behind. “When are the tablets and maps going to come?”. When are they going to stop their drivers going around in circles?” I would ask myself as the clock ticked before the arrival of Uber.
Uber is coming, and if they don’t sort these basic steps out…. then they are going down.

Grab and Uber came by, and sure enough the Vietnamese gladly took to the apps which were offering set prices (or nearly set prices) at a cheap price. Drivers going in circles were a thing of the past and there became nearly no reason to use a traditional Taxi service.

Traditional Taxi services did eventually introduce in car tablets and phone apps to stop the drivers going in circles. It was too little too late and now there are cries for help and appeals to locals to support local business. This is met with little as sympathy as it seems even the Vietnamese population think they deserved to go down for reacting so slowly to dishonest drivers.

Traditional Taxi companies went down for short sighted business practices and they deserved to be in the wreckage of a position that they find themselves in today.

The Airport remains a Taxi disaster

The Vietnamese government is always complaining tourist numbers are not where they should be. Logic would have it that the airport is a good starting point to fixing this problem. Travellers book their sunny beach holiday to Vietnam only to arrive at a chaotic airport full of money grabbing Taxi Drivers.

For some reason Grab and Uber are not allow’d into the Airport which means unless a traveller is brave enough to boldly walk out of the confines of the airport and onto the open road then they are stuck with traditional Taxi services. VinaSun and Mai Linh are in the Airport and it is a scramble to get these taxis (even for the locals).
For the average traveller landing, they end up in a backstreet Taxi or “Airport Taxi” and quickly find themselves in a negotiation. Huge sums are commonly charged and it is a great “welcome to Vietnam” for any guest.

The airport also has a tariff for cars coming in and out (10,000vnd) and it is customary for the client of the Taxi to pay. However for the traveller just arriving this will be perceived  as the first horror sign that they are about to get ripped off. What may be an honest move from a good Taxi can be seen as dishonest by a new tourist.

Grab and Uber arrived on the scene at similar times. Grab managed to grab (ha) the motorbike market and Uber managed to get the car market. The reasoning behind the market shares are mostly down to the amounts the companies pay drivers for the different services.

Uber had issues of random spiking of fairs for busy hours and “rain”. This is standard for Uber around the world. In Vietnam, Grab were competing with set prices.

A situation of low Uber prices with random fare fluctuations
VS
Higher grab prices but a set price.

As time went by, grabs aggressive marketing and pricing structure tore Uber apart and as of 2018 Grab has now acquired Uber.
The real losers were the drivers who got hit by grabbing lowering pay from the monopoly position they are now in.

Competition is around the corner

Phung Trang also known as “Futa bus line” operate the largest bus network in Vietnam. A company that Tigit frequently uses for transport of motorbikes. Phung Trang is a good company and their expansion across Vietnam has been impressive.
They have now launched a rival app called VATO which is currently in Beta stages for Vietnamese only.

Exciting times for the Taxi world in Vietnam!

Who really cares about Taxi’s anyway. Just rent a motorbike!

Tigit Motorbikes rents motorbikes in the city for 25usd a week or we have long distance motorbike rental for renting from one city to the next. The Southern city of Ho Chi Minh to the Northern Hanoi being a common journey.

We do not offer collection or drop off services, so travellers still need to use a Taxi to get to our office. Tigit strongly recommends using Grab where possible as the prices are fair and incredibly cheap! Navigate to our Ho Chi Minh office, Danang office or Hanoi office. 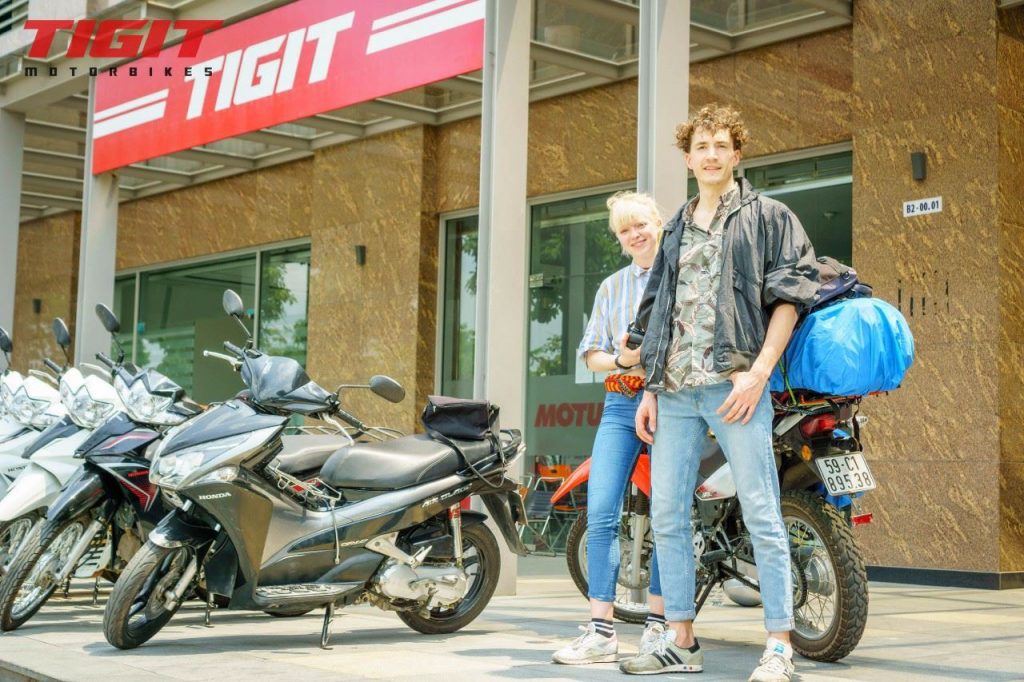 Racks and Luggage for Motorbikes